Whilst in some doubt for a while, the 8th Challenge Trophy was held at Five Lakes Hotel and Golf Resort near Colchester in mid-August. 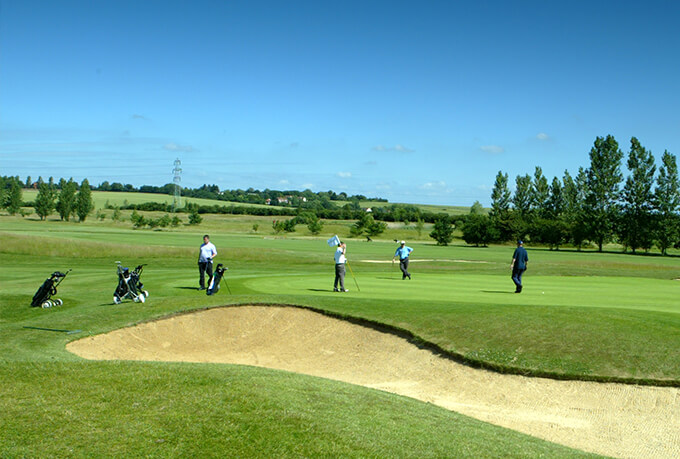 With no pints of draft beer available, BBUKs usual tactic of getting the competition intoxicated went out of the window and Team Champion started clear-headed on the 1st with 2 good drives. It needed a solid PAR from young Fleming to half the hole.

Neill and Steve smelt a rat when they realised their hosts had thoughtfully provided much needed rehydration in the form of bottles of Moretti! Steve had a bottle per hole and stopped rehydrating at the 6th hole! Coincidentally, it was from the 5th that Mark and Simon began a 4 hole winning streak as Simon played some great golf and Mark didn’t!

At the turn BBUK were 3 up. The 10th was halved after a brilliant long wood into the green from Steve … more than making up for a duffed 2nd shot. On the Par 3 11th BBUK sponsored hole, Mark made up for missing the green with an up and down to make PAR and take the hole.

With lost balls off the 12th tee for Mark (x2) and Simon (x1) it was straight forward for Neil and Steve who held their nerve (stifling laughs) to take the hole comfortably.

So, BBUK 3 up with 5 to play going into the 14th. Mark’s drive hit the hyperspace button never to be seen again but despite solid play from Neill and Steve, Simon managed to halve the hole and importantly Champions were running out of holes to play.

On the 15th whilst Mark was loitering in a ditch, Simon won the hole and it was victory to BBUK 4 up with 3 to play.

Next morning, Tom Ford replaced Mark (someone had to) and the battle resumed, playing this time for the “Hangover Cup.” As the hotel bar was closed at 11.00pm due to Covid measures, it was more of a bright eyed and bushy tailed cup.

At the turn Steve and Neill lead the Brooks boys by 3 and stood on the tee at the 13th 3 up. But, by the time they got to the 18th tee (following something of a batting collapse) it was all square with everything to play for. Once again Severiano Greig triumphed and Neill and Steve had snatched defeat from the jaws of victory! The handicap committee will be looking at Mr Ballesteros’s score. The PGA head coach will be looking at Duffer Fleming’s swing! We know his problem…LOFT…..Lack of F***ing Talent!