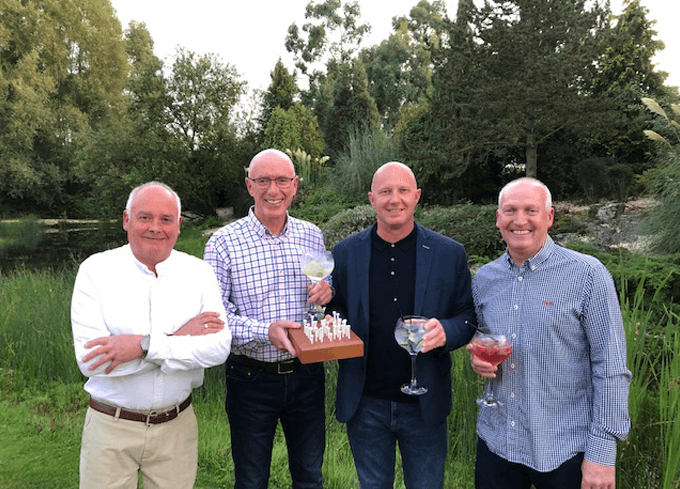 Still smarting from last year’s defeat in Vilamoura the Brooks boys were keen to get their hands back on the trophy, whilst the Champions guys were determined to keep hold of the trophy ... so much so that Steve “left” the trophy in his car back in Surrey!!

Fuelled by ham egg and chips, liberally washed down with Moretti the guys teed off at the first in front of a 20 strong gallery. Despite the pressure they got 4 good drives away and Steve hit a magnificent 2nd shot to only 3-4 feet from the pin. Despite a solid PAR from Mark, Steve made the putt for his birdie and 1 up for team Champion.

Young Fleming hit a rare golfing purple patch and team Brooks came off the 5th hole 3 up but the purple patch moved over to Steve and by the 8th it was all level.

At the 9th it was only after Simon sank a long putt from the edge of the green that Brooks won the hole.
By the 15th Brooks were 2 up and despite a short drive, Mark’s 7 iron (slightly thinned to be honest) found the green and won the hole.

At the PAR 3 16th the Brooks boys knew they just needed a PAR from one of them to at worst halve the hole for a win. Simon’s 8 iron off the tee went well left but Mark’s 7 iron made the front of the green, just! Neill who had driven well all day, uncharacteristically played his tee shot into trouble and the pressure was now on Steve. His tee shot looked dead straight but was it long enough? ... the ball plummeted into the front bunker only to bounce out and on to the fringe, a foot from the green! Mark muttered something that even a long distance lorry driver would find offensive! Steve topped his putt out of the fringe and the ball raced past the hole to the far edge of the green. Mark’s long approach putt finished 2-3 feet away and was sportingly conceded ... giving the Brooks boys the win 4 up with 2 to play.

Mark looks forward to Simon’s game turning up with him next year!